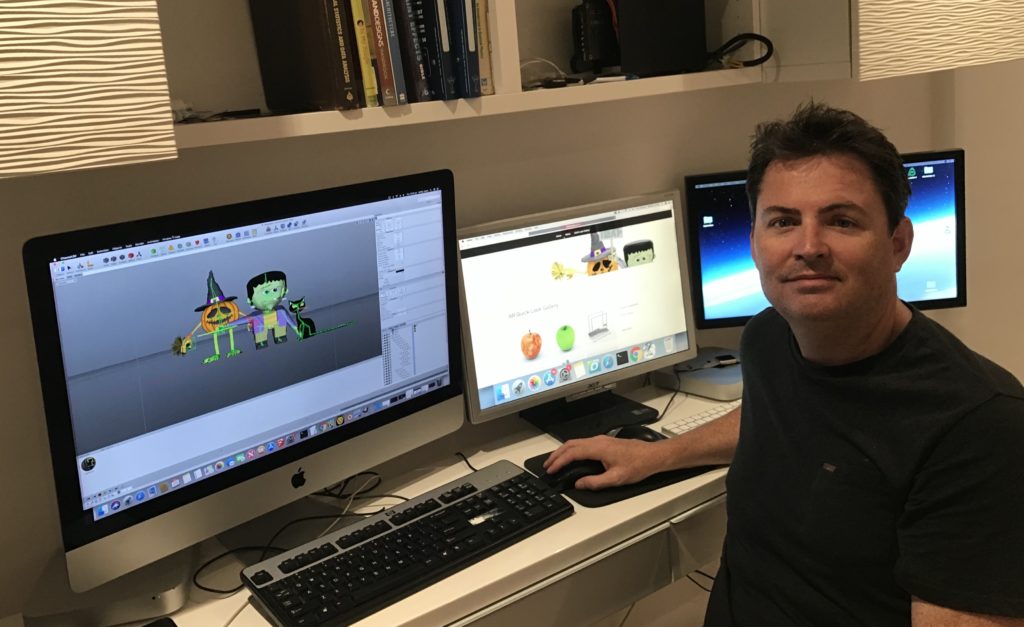 In my office – working on another usdz animation.

I’m based in Sydney Australia, and these days I would probably describe myself as AR mobile/web technologist. For past several years I have been focussing on core technologies mainly in the areas of machine learning & augmented reality. I view both of these technologies as the most likely to change the shape of the way we use computing in the next few decades.

After completing a number of machine learning courses between 2015 & 2016. I set myself the task of building a quantitative financial modelling tool using the R programming language and Shiny ( a web framework for building, single threaded applications).

In early 2017, I took a closer look at mobile apps and how I could incorporate them into my own web-based tools. After the release of the swift Arkit framework in June 2017, I concentrated on building several mobile AR apps for iOS. Whilst the apps were useful in their own right, I knew for AR to become mainstream,  you would need a browser based solution which did not require a standalone mobile app to access AR content. The answer to that problem was the release of the USDZ file format in June 2018, which had universal appeal for web developers. Whilst USDZ cannot be viewed in other major browsers like Chrome or Firefox yet, support is likely due to the open source nature of the file format. If this happens soon, USDZ will become a central  file format for AR deployment via the web. For this reason, I have been working daily with this USDZ since its release in June 2018. In that time, I have been collaborating with others AR enthusiast & early USDZ adopters, steadily building up expertise on the file format.

Therefore, If you need professional help, guidance or collaboration with the USDZ framework please get in touch.

I can help with any part of the USDZ pipeline. From creating the 3D models, animations to hosting & deployment of 3D models in iOS apps or via web-based content management system.

To take USDZ to its full potential, requires a good knowledge & understanding in the following areas:

I am also able to leverage my earlier working with the Arkit/Scenekit framework whilst moving forward with USDZ.

You can read more about Arkit apps I have developed here.

In the past few months I have worked on a number of different USDZ based commercial projects for clients in the tourism and digital marketing sector. A recent project was working on Saudi National heritage models for Tourism Commission which can be viewed online here.

Please check out my AR Quick Look Gallery if you haven’t already, which showcases my 3D modelling & animation skills.